The main aim of the plenary was to discuss the strategy for the next 5 years after the Film Forever strategic plan. The topics within the talk and the different questions that were raised could be summarised as follows:

This session was particularly good. These are the ideas that were discussed:

In summary, these themes were discussed:

I do not have complete notes, although I have pictures of the flipchart for 1) Heritage and 2) British Film (below). 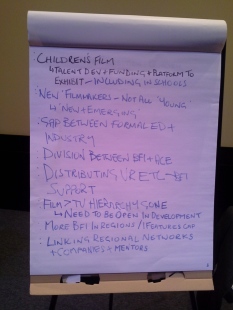 Joining in the debate: how the roadshows work

The roadshow will start with a welcome and introduction followed by a brief overview of what we have been doing as part of Film Forever along with a snapshot of our regional activity and support. This will be followed by a general panel and audience discussion centred on our key themes, your priorities and how you want the BFI to make a difference. You will then have a choice to explore the key priorities in greater detail through a choice of two of the following workshops (chaired by the BFI lead named below or a member of their team):

To register a place for the Manchester roadshow and your choice of workshops, please click on the green REGISTER button above.

Everyone is welcome! Places are limited so please book early.

Our consultation launches on 24 June and runs on bfi.org.uk until 8 September 2016 – please do make sure you also let us have your views online.

So... what do you think? Cancel reply